Animals of the jungle: learn more about the Amazonian diversity

How big is the Amazon rainforest? The Amazon Rainforest is one of the most biodiverse regions on the planet.

The Amazon rainforest is a world full of unique, wild and savage animals. As much as human beings have had the goal of discovering the Amazon in its entirety, the goal is impossible to achieve due to the number of remote areas, wild tribes and animals that you do not want to cross.
However, humanity has known how far to go and respecting nature we have learned more about the jungle, the Amazon and wild animals, in danger of extinction and some with whom you can interact without any problem when you organize a trip with us through the jungle.

We know, you were googling about the types of animals that live in the jungle of Peru, about the animals that live in the Amazon River and also about the most dangerous animals that will pass in front of you in this great adventure. Take it easy, you’ve come to the right place. At Junglexperiencia we know perfectly well that you require a lot of information to make this travel decision that will change your life completely. We are experts in jungle travel and we have all the information about it. What animals live in the Amazon? What are the most dangerous animals in the jungle? What animals live in the famous Amazon River? Find out everything below:

Did you know that in the last 15 years, around 1000 new species of plants and vertebrates have been discovered? With such diversity, our Amazon rainforest is home to a wide variety of jungle animals that you will not be able to find anywhere else on the planet.

In addition, only in Peru more than 1870 species of birds have been registered, being the second country with the largest diversity of birdlife. Many of these birds are species from the Amazon, which represents more than 60% of the national territory.

In case you decide to live the adventure of knowing the immensity of the Amazon with our cruises. We will provide you with a list of the most exotic species of birds that you will find during the experience. Keep reading! 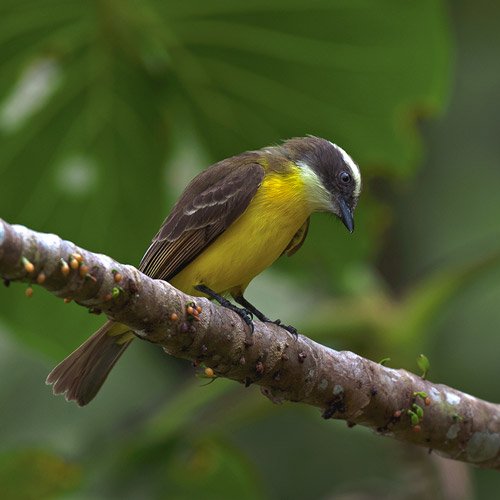 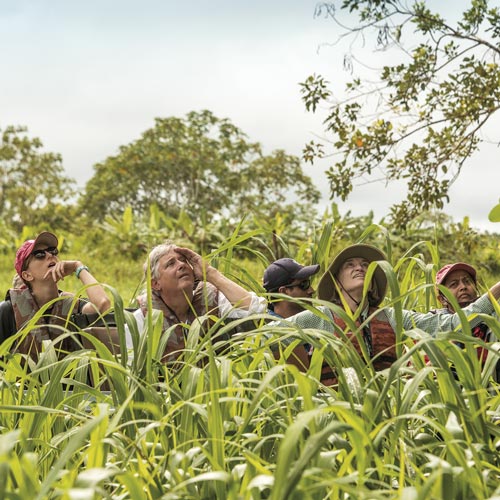 Where is the Amazon rainforest?

Did you know that Amazon has reached nine countries? This region is located in South America covering more than 5,500,000 km2 of rainforest. The Amazon jungle is considered the largest rainforest in the world. A home for thousands of species of Amazonian animals, plants and trees. Making it the most biodiverse tropical rainforest on the planet.

Going a trip to the Amazon rainforest is a nature-lover’s dream of a lifetime. Home to a variety of exotic animals in the amazon rainforest, it is a stupendous area of jungle offering the largest and most diverse assortment of animals and plants in the world. Here are some of the fascinating wildlife you can expect to see living right here in this natural paradise.

What are the most dangerous animals in the Amazon?

The jungle, like many other natural places where wild animals live, has dangers and if you don’t go with a guide it is really dangerous.
The Peruvian jungle has a huge list of animals so it is impossible to know the exact number of animals that live in the jungle, what if you can give an approximate is the number of types of animals, which until recently it has been estimated that in a single hectare of tropical forest there are about 1,500 different species of animals, including mammals, reptiles, amphibians, birds, insects and even fish.

Now, what are the really dangerous animals of the Amazon rainforest?
Among the huge list of animals that can harm you, we select the main ones, which are:

In animals of the jungle you will meet some of the most exotic Amazonian birds. 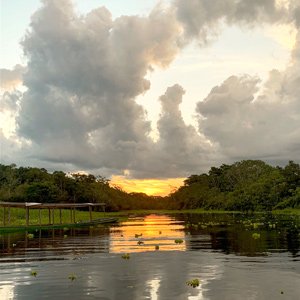 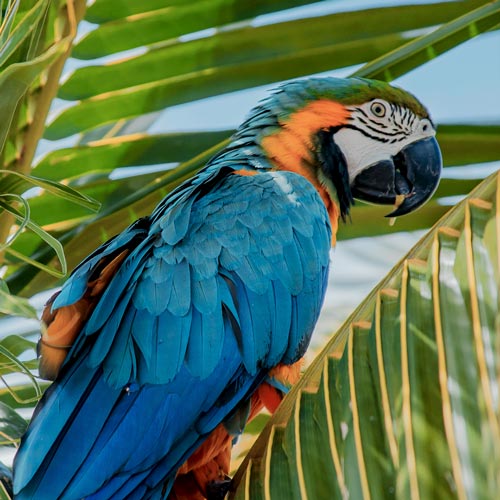 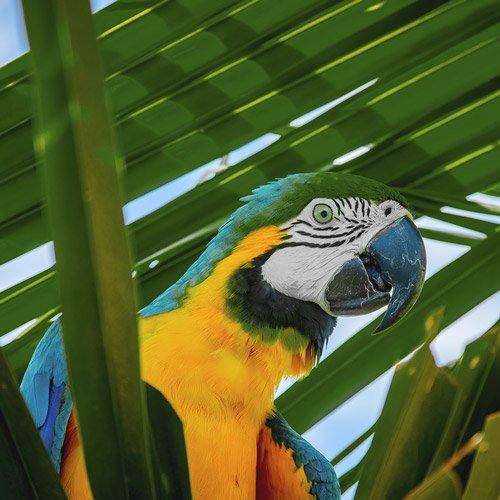 Exotic animals in the Amazon jungle.

They are one of the smallest animals in the Amazon rainforest. Its yellow color stands out in the middle of the Amazon jungle. The average length is 13.2 cm and their weight is around 19 g. Its plumage, its forehead, throat and the area around the eyes are black simulating a mask. Did you know that these animals of the Amazon rainforest move in pairs or in groups of up to ten birds?

The pink dolphin of the Amazon have been on the red list of animals that are in danger of extinction due to many factors, some such as hunting and others more important and current such as the pollution that the river has been suffering as a result of different exploitations of fields. of illegal mining (mercury in river). In addition, the installation of more than 140 hydroelectric plants and the planning of an additional 160 is generating worrying consequences for the conservation of these cetaceans. 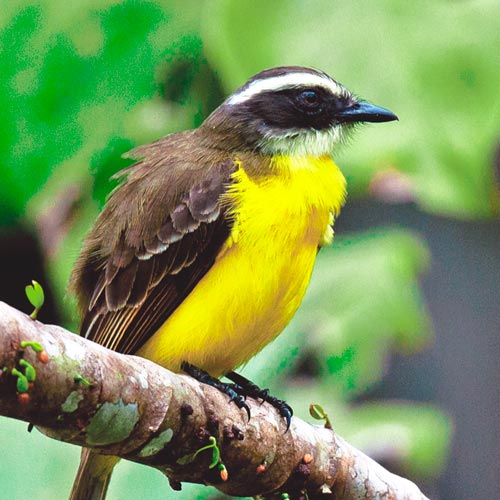 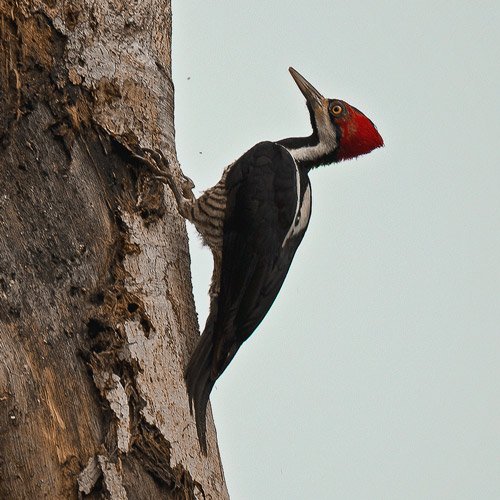 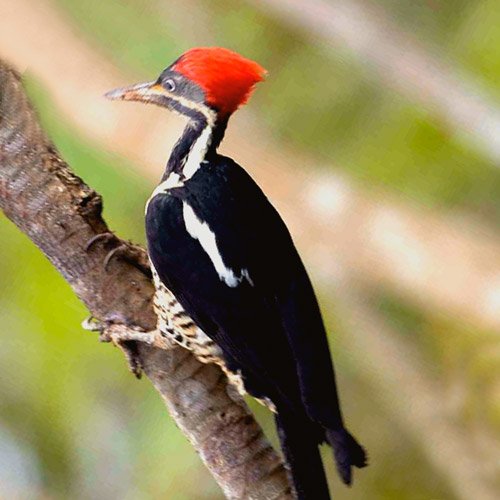 The woodpecker belongs to the genus of neonate. Other birds included in this group are toucans, ostriches and emus. It measures approximately 46 centimeters. Its plumage is divided into several shades, as its head is red, its fur is black, and it has white stripes that come out of its beak. Its diet consists of worms, larvae and insects that are removed by their strong beak from the bark of trees. They are characterized by emitting a loud noise, similar to a laugh.

Do you feel excited to explore the exotic Amazon rainforest? These are only 3 species of the thousands of birds that exist in the Amazon. Together with our experienced tour guides, you will be able to enter into the deepest part of the Amazon jungle, and experience unique activities. Activities designed for lovers of Amazonian fauna and flora!

Whether you’re lucky in animal sightings while visiting the Amazon or anywhere else in the Amazon, it’s estimated that you’re going to witness some great wildlife. This strangely lovely place will practically look like another planet as you walk in the canopy under towering jungle forests.

In Jungle Experiences we have cruise packs through the Amazon River, where you will enjoy the tranquility of the jungle and participate in the diverse excursions through the Amazonian Jungle so you can see the species that live there. If you wish more information about luxury amazon cruise, write to us at info@junglexperiences.com

Start planning your next trip! 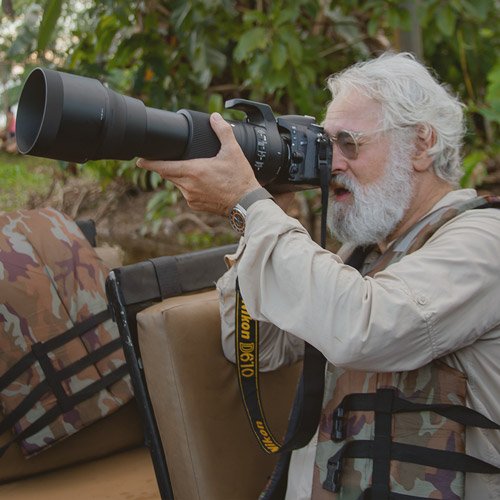