Personal experiences of travelers who have discovered one of the best experiences in the world, visiting the Peruvian Amazon

The floor is covered with a sludge of decomposing plant life as I slosh through—after being caught in a sudden downpour—in my rubber boots trying to keep my balance. “Avoid touching any branch or tree for support,” instructs Juan Tejada, our naturalist guide. “It could be covered with poisonous spikes or needles.”

It’s been a magical world of changing texture, light and sound. Small logs embedded in the floor act as walkways. In other places, there is only a carpet of orange leaf litter. There are fallen logs that look like spaceships, with white bouquets of mushrooms growing on its surfaces.

A flock of parakeets squawk noisily above the canopy, epiphyte plants like bromelias and ferns sprout from stocky trunks. Below my feet, ants and caterpillars walk in single file, like resilient soldiers.

Juan shows us an army of deadly red bullet ants around a palm tree. 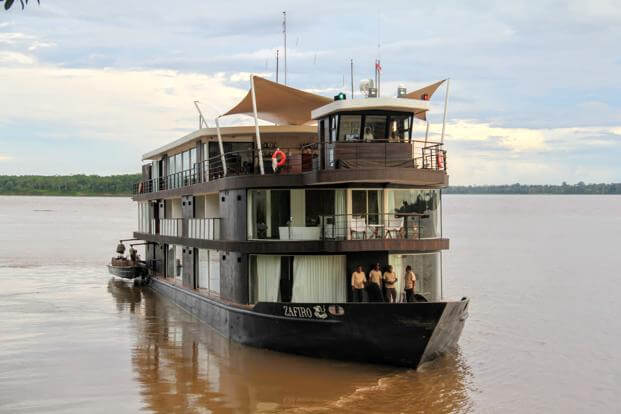 I am cruising the mighty Amazon in the Pacaya Samiria National Reserve of Peru, on the luxury boat Zafiro run by the Jungle Experiences company. The cruise includes gourmet meals, excursions in the forest with a naturalist and boat trips into creeks and lagoons.

Our journey started in Iquitos, once a town of rubber barons, in Northern Peru, east of the Andes. It’s now a jump-off point for cruises on the Amazon and a transport hub for the communities living along the great river.

The huge floor to ceiling windows in my suite on the boat frames the ever-changing panorama like pretty wallpaper. Our days fall into a peaceful schedule: early morning and late afternoon excursions in the forests, and chilling in the outdoor jacuzzi or reading in the living room in between. Evenings are lively with the multi-talented staff playing peppy music—from “Despacito” to “El Condor Pasa”.

The cheerful staff work behind the scenes, plying us with cold camu-camu juice (an Amazon berry with a high levels of Vitamin C) after excursions, cleaning our muddy shoes, and organizing our rooms. This is not another average cruise—the emphasis is on exploring the fragile ecosystem of the Amazon where 20% of the earth’s oxygen is produced and where 90% of the plants used by natives have not yet been studied by scientists.

The Pacaya Samiria, established in 1982, sprawls over 21,000 sq. km and is the largest protected flood forest. This national park, also called the mirrored forest because of the reflections in the waters, is in the shape of a giant triangle, bound by the rivers Maranon in the north and Ucayali in the south. The park is home to diverse ecosystems from terra firma (high ground that is never flooded) to swamp forests.

We start off exploring the Yanayacu Reserve where, in a small clearing in the rainforest, we see a pond filled with massive Victoria lilies with pads as big as a baby’s crib—they have thorns on the underside to prevent mammals like manatees from crawling up. The flowers turn from white to pink and finally purple, blooming for just 48 hours. The buds enfold scarab beetles inside them in the night, and let them out in the morning after their pollination.

The turbid black waters of the river are because of the minerals from the organic matter, the shiny surface reflects billowing clouds and tall trees like a mirror. In the waters are electric eels, fierce piranhas and grey dolphins.

As we glide on the waters, in our wooden skiffs, we see the occasional flash of herons and egrets on the shores and pods of playful endangered pink dolphins with their bulbous heads. They pop out for a nanosecond—never enough to get a proper image in my camera. Juan tells us that their pink colour is due to the presence of blood capillaries close to the skin’s surface.

After some days in the Amazon, we realize that the forest keeps its secrets… secret. It’s in the quiet backwaters, creeks and lagoons that we spot wildlife. Each new foray teaches us to be observant and patient: we learn to decipher clues, look at high branches and watch out for signs like rustling foliage or a swaying bough. 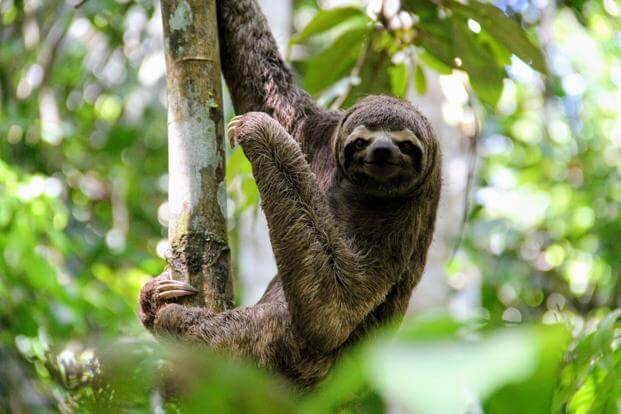 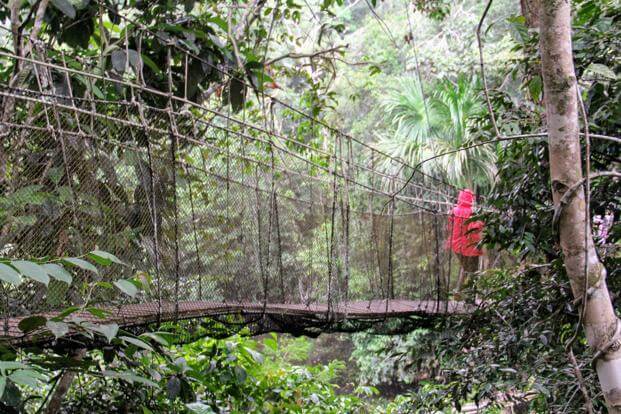 Long limbed lethargic sloths curled up in high branches are the most difficult to spot and without Juan’s radar eyesight, we would have not been able to catch sight of them. I learn that they sleep for up to 18 hours a day, and three-toed sloths are actually great swimmers. If they would be bothered enough to wake up.

Some, like the horned screamers—also called the donkey birds—are recognized by their chorus of screams. We walk through the rainforest in a 20-hectare private forest reserve called Casual, accompanied by a local boy, Jorge raised in the selvas (forests), who is a tracker. He has lived in this jungle and knows his way around, blindfolded.

He darts into a tree and returns with a miniscule frog in the brightest jewel tones—the red backed poison dart frog. “Its venom can paralyze or kill a predator and because of its colours, it’s called the jewel of the rainforest,” says Juan.

Its toxins have been extracted for use in medicines. The most thrilling part of the walk is when Jorge gestures at us to follow him down to small creek in the middle of the jungle. Curled in a heap is an adult anaconda—South America’s most poisonous and feared snake—in a heavy stupor.

We get close enough to get brilliant photos as this deadly creature, which can live up to 60 years and grow up to 45 feet long, lies supine almost merging with the colours of the forest.

The showpiece of the trail is a 300-year-old strangler fig tree with its roots meandering all over the forest floor. “The strangler fig grows around the host tree, using it as scaffolding, but it smothers it to death, at which point the fig can stand on its own,” explains Juan.

“It represents the entire ecosystem of the forest—as many as 250 species can live in this tree from snakes, frogs and beetles to orchids and philodendrons,” adds Juan.

The jungle is an ornithologist’s delight. Parakeets and large billed terns swoop over our heads, yellow-headed Cara Cara vultures circle tree tops, watching out for their prey, egrets and storks amble on the shores, scarlet macaws flash their iridescent wings as they fly over the canopies and the blue flash of a kingfisher signals a fish caught.

The Bushmaster Trail through Reserva National Alpahuayo Mishana is one of the best trails on our trip. We walk through the steamy jungle, our shirts dripping with sweat. Every bough, every branch teems with life.

Juan points out the trees to us—the porcupine palm with its spiny needle-like fibers used by the locals to weave bags and baskets and make artefacts. Foraging columns of leaf cutter ants carry little polygons of cut leaf like small flags—they deposit them in a fungus farm where it can feed the entire colony.

“It can carry 50 times its weight,” says Juan with admiration. We see the red mahogany tree soaring majestically into the canopy—it’s one of the most coveted building materials in the world. Called red gold by the Peruvians, this expensive tree has been decimated by illegal logging.

Here also is the Ayahuasca vine, the hallucinogenic tree. I love the giant limbs of the Ceiba or the kapok tree (whose strong fibre is used to fill pillows and mattresses), which can be as tall as 200 feet.

“The Amazon rainforest is so sprawling and remote that it is impossible to monitor the entire area effectively. Illicit practices are believed to account for three-fourths of the annual Peruvian timber harvest,” explains Juan.

We reach a teetering canopy walk in the area of San Regis that is a series of hanging bridges, walkways, and observation decks, taking us 100 feet above the forest floor. I step on and along the rocking bridge, shaking and swaying my way through the primeval forest.

I smell the vanilla-like fragrance of orchids, watch beetles crawl on tree trunks, bulbous termite nests on trees and see the flash of parakeets overhead. The vast majority of the rainforest’s wildlife lives close to the sunlight, in the canopy, spending their entire lives suspended in the branches.

Our cruise glides past many small villages with houses on stilts, a football ground and a school—the lives of the people who live in these villages are simple. They make their livelihood by fishing, farming and hunting; they travel by dugout canoes and live with no refrigeration and no electricity.

We visit the village of Bolivar where the most heartwarming time is spent with children learning a few handy Spanish phrases. Their face radiates an enthusiasm and infectious happiness that has nothing to do with their simple lives. At the end, hand crafted items are laid out for sale—from bowls and jewellery to animal carvings and woven baskets.

One afternoon, we head to a creek to indulge in piranha fishing—unlike the Hollywood image of the deadly piranhas, we realize that they are actually just scavengers and fruit eaters. We fish with small bits of meat as bait, swishing the water with our bamboo poles.

After some time, I feel a tug and triumphantly wheel out a red-bellied silver piranha. Juan cautions me as he pulls it close to him, to show us its deadly fangs, which can tear flesh in a matter of seconds. 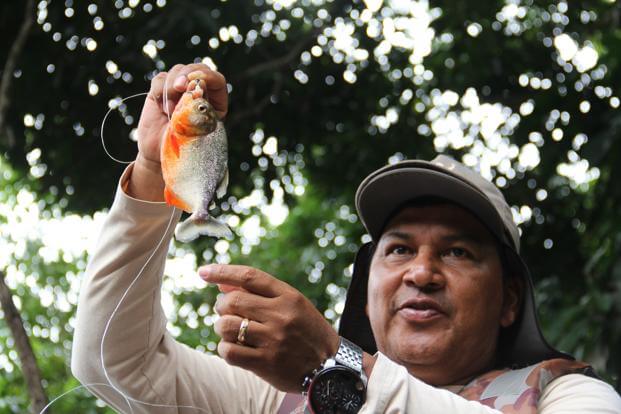 On our last day on the Amazon, we don our raincoats and whizz down the river in the velvet black tropical darkness, the shadows of trees like wraiths, with the light of flashlights to guide us. Juan balances on the prow with a searchlight and shines a powerful torch into the dense fringe of water lettuce and water hyacinth fringing the river’s edge.

Not before long, he asks the boatman to stop as the beam bounces off the shiny red eyes of a baby caiman. He picks up the wriggling caiman nonchalantly, shows it to us, and casually drops it back in the water.

On our return trip, Juan turns the motors off and allows the skiffs to float with the current. We listen in absolute silence to the sounds of the jungle—the staccato of insects and the croaks of frogs.

I wish I could bottle it and take it back to the urban jungle where I live.

Kalpana Sunder is a travel writer and Japanese language specialist who believes in serendipity and the power of a hug.