Discover the wonders of the jungle and its different Amazonian tribes

We can’t talk about the Peruvian Amazon without mentioning the long list of traditions that take place in the region. These traditions have been passed on generation by generation to the people who live here and it is thanks to it that we can get to know them. The Jungle is a place where we can feel like the stranger, instead of the other way around. An almost infinite amount of vegetation extends from every corner and the exotic fauna that lives there daily can give us that feeling. 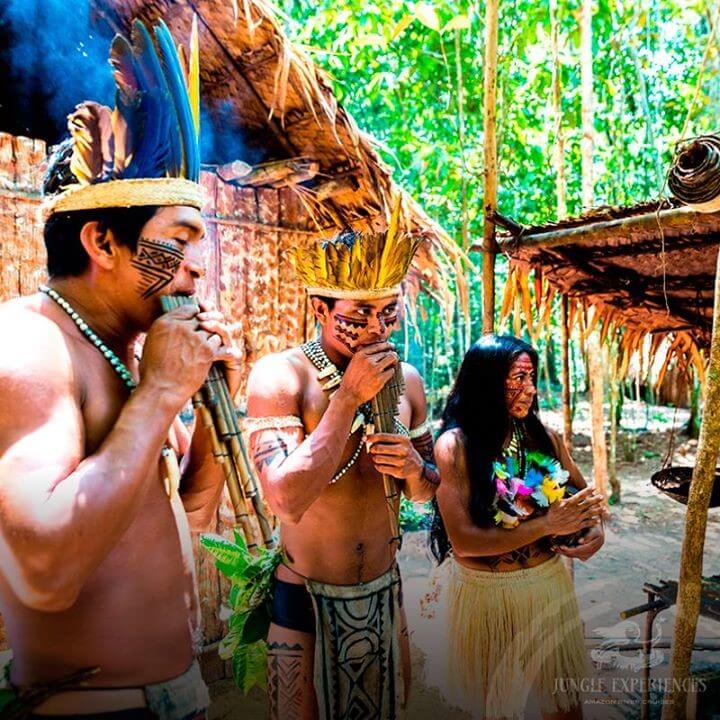 Today, there are a lot of towns that have been contacted and live in harmony with the people who go through the Amazon on a daily basis, whether they are tourists or just curious beings. But there are also some communities that either avoid any kind of contact from the outside world or are legally protected by reservations that are very hard to reach. Before the arrival of the Europeans, the tribe’s population reached 5 million people, but today there only remain a few hundred thousand. One of this communities is the Yaguas one, that have approximately 3500 habitants. It has been said that there was a time were the Jesuits arrived to the community and used it as a shelter in an attempt to escape from the Portuguese. For many years Yaguas lived escaping, apart from been forced to work as slaves (during the rubber years). It wasn’t until the 70’s that they could regroup and install themselves in ‘native communities’, thanks to the new Peruvian legislation. Their economy is based on hunting, fishing and recollection; as well as commercialization of leather, wood, meat and fruits. Another community is known as Secoya, which has a population of 687 habitants. During their best years (1709 to 1769 approximately), they had up to 17 towns, but due to the rebellion it was impossible to have those numbers again. Also, during the rubber years, the situation had worsened due to the debts they had with their ‘landlords’.

In the conflict Perú had with Ecuador, this people had to flee. This are only two of the communities of the Amazonian Jungle. There are many more like this ones, with different stories from a very long time ago. You will want to get to know them because of their rich culture, with hundreds of traditions and myths that give this regions of the Peruvian Amazon, a mystical aura. In addition to them, there also exists communities that are denominated as isolated Indians. It is estimated that up to today, there exists about 15 isolated towns in the Peruvian Amazonian Jungle: some of them are the Cacataibos, Isconahuas, Matsigenkas, Mascho-piros, Mastanahuas, Murunahuas (or Chitonahuas), Nantis and Yoras. These towns suffer multiple threats towards foreign contact, such as the incursion of businesses that explode their resources as well as occidental diseases that they have never suffered.

This is why most of them live in auto-confinement, so they can keep coexisting with nature in peace. In Jungle Experiences we have well prepared guides that know about their history and traditions and will escort you during the whole trip in a cruise through the Amazon.

Remember, if you want a luxury travel advisor, please contact us at info@junglexperiences.com